CFIUS’ annual report, which was released Tuesday and covers activity for 2015, shows that while the overall number of transactions reviewed by the regulator held steady with the activity recorded in 2014, the share of those reviews that proceeded to an investigation climbed from 34.7 percent to 46 percent.

The contrast for 2015, however, is evident in the number of reviewed deals that went on to be investigated by CFIUS. Investigations were initiated in 66 of the 143 transactions that were reviewed, according to the report. That’s compared to the 51 investigations initiated from the 147 reviewed transactions in 2014. Statistically speaking, however, 2015 activity was still below the historical high of 49 percent in 2013, when 97 transactions were noticed and 48 were reviewed. 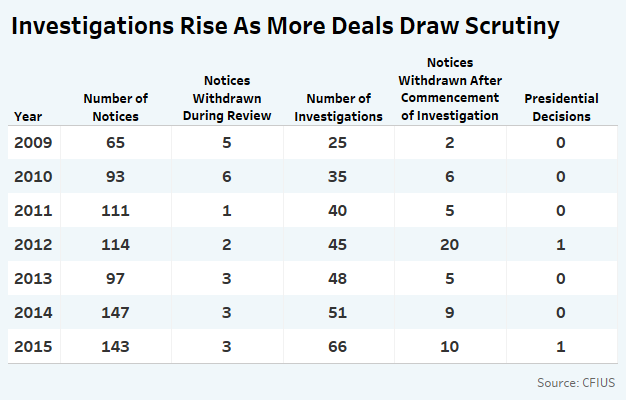 Of the 66 that were investigated in 2015, one was rejected for misinformation, 11 were allowed to proceed with mitigation measures and 13 were withdrawn. There were nine transactions that refiled after being withdrawn, while three transactions were abandoned after mitigation measures either could not be identified or could not be agreed upon. One of the withdrawn deals was abandoned for commercial reasons unrelated to CFIUS, according to the report.

The general feeling is that the heightened scrutiny has increased even more since 2015, as more transactions are being reviewed by CFIUS. Earlier this month, Clay Lowery, managing director of international economic policy advisory firm Rock Creek Global Advisors LLC, testified in front of the Senate Committee on Banking, Housing and Urban Affairs as part of a hearing on CFIUS that more than 170 transactions were reviewed in 2016 and that it’s his understanding that in 2017 “CFIUS is on pace to investigate a much higher number.”

That means that the uptick in investigations recorded in 2015 is likely only just the beginning of a significant upswing in activity, explained Mark Plotkin, a Covington & Burling LLP partner.

“The increase in the number of investigations in 2015 I think foreshadows what has become a trend of increased tightening and scrutiny by CFIUS over the last few years that accelerated in 2016 and 2017 in ways we will only see when those reports are released but that a lot of those in the CFIUS bar have experienced,” Plotkin said.

For the fourth year in a row, Chinese buyers accounted for the largest number of deals being reviewed, as concerns about the country’s emphasis on sensitive technologies continue to grow. 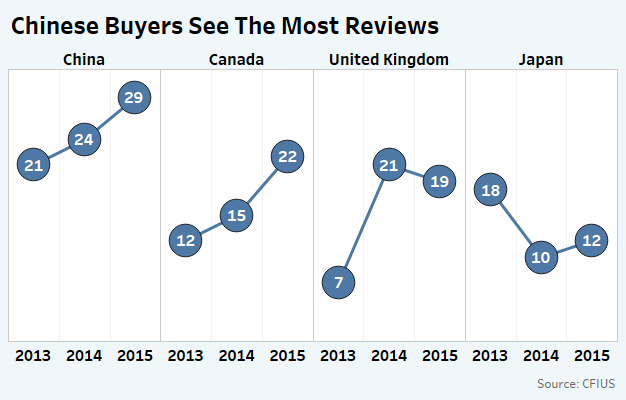 Even though Chinese acquirers drew the most reviews in 2015, there were only three overall that CFIUS blocked, meaning that most deals from the country were able to ultimately secure approval, explained Christine Laciak, a Freshfields Bruckhaus Deringer LLP special counsel.

“Only three transactions were abandoned as a result of CFIUS raising concerns. So it suggests that even if all three were by Chinese acquirers, the vast majority of transactions reviewed by the committee involving Chinese acquiring persons [were approved],” she said.

Even so, the scrutiny of Chinese deals is expected to continue to grow — and the involvement of a Chinese buyer with government ties has led both former President Barack Obama and President Donald Trump to each block a transaction that tried to challenge CFIUS’ findings.

Kevin Wolf, an Akin Gump Strauss Hauer & Feld LLP partner who testified at the recent Senate Banking Committee hearing this month on CFIUS, noted that the conversations surrounding CFIUS and Chinese investment are showing a concern about the interagency committee’s ability to address the increased activity.

“The tenor of the hearing from last Thursday, from Democrats and Republicans, was that there was a significant amount of increased activity involving activity in sensitive areas,” Wolf said.

That is leading to a closer examination about if CFIUS has the reach it needs to be able to monitor activity targeting sensitive areas, particularly from countries like China, he noted.

In the section of the report highlighting the “perceived adverse effects of covered transactions,” CFIUS for the first time says that it considers the national security risks associated with acquisitions targeting companies that “hold substantial pools of potentially sensitive data about U.S. persons and businesses that have national security importance" in its reviews.

According to CFIUS, businesses with that sort of data could come from a variety of sectors, including insurance, health services and technology.

“They acknowledge for the first time in this annual report — although certainly in practice they have already been taking action — that if a target business has enough information collected, a large enough pool of data about U.S. persons, that somebody who has interests that are against the U.S. can use that to harm our national security interests,” said Laciak.

The inclusion of “pools of potentially sensitive data” highlights the growing reach of CFIUS as national security risks continue to evolve over the years.

“You wouldn’t immediately think that the acquisition of an insurance company might in itself raise national security concerns but we know based on CFIUS’ track record with respect to acquisitions in these industries that there are sufficient concerns,” Laciak said. “It does seem that it’s a broadening of the types of activities that they think present a concern or threat to national security interests.”

While the inclusion of pools of data showed a broadening of CFIUS’ interests, the overall sector split of transactions reviewed by the interagency committee represented a similar breakdown to the year prior. 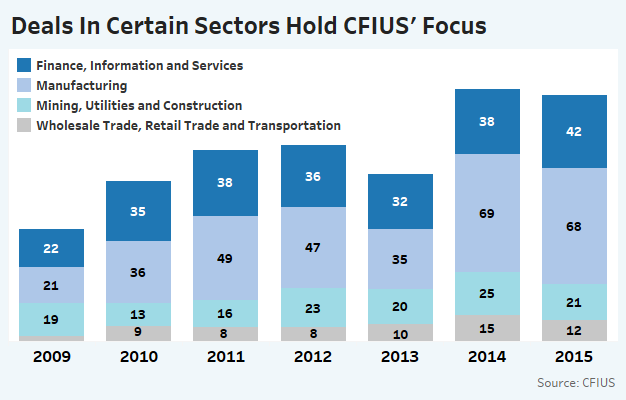 Of the 143 covered transactions, 68 were in the manufacturing space; 42 were in finance, information and services; 21 were in mining, utilities and construction; and 12 were in wholesale trade, retail trade and transportation.

That compares to the 69 manufacturing deals; 38 finance, information and services deals; 25 mining, utilities and construction deals; and 15 wholesale trade, retail trade and transportation deals reviewed in 2014.

There was a notable language shift between the 2015 and 2014 reports in the section about countries using a coordinated strategy to acquire critical technology companies, reflecting the growing concern about such a sensitive area.

The section of the report in 2014 said that the intelligence community “believes there may be an effort” but in 2015 states that CFIUS cannot provide information on this topic “on an unclassified basis.”

“That language clearly suggests to me that the intelligence community has made a formal judgment, based on data and reasonable inference, that something is going on,” said Mario Mancuso, a Kirkland & Ellis LLP partner.

This isn’t the first time there has been a shift in the language of this section, which shows the evolution of the concern. The 2012 report said that a coordinated effort was seen as “unlikely,” but that changed in the 2013 report which also deemed the existence of a coordinated strategy as believable.

“They pivoted in the 2013 and 2014 reports to say there was such a coordinated strategy, and then by 2015 they decided they simply couldn’t talk about it anymore,” Plotkin said.

The annual report for 2015 was significantly delayed in being released, which can most likely be attributed to a combination of the growing number of transactions being reviewed and the limited staff available as key senior roles are still waiting to be filled following the changeover in the presidential administration.

While the report came out this month, the last two years the annual report was presented in February. In 2008 through 2013, the report was either released in November or December of their respective years.

“This one has been released so much later than prior annual reports,” said Jeremy Zucker, co-chair of Dechert LLP’s international trade and government regulation practice. “You might infer that it reflects at least in part that CFIUS is insufficiently staffed ... And it also reflects likely the greater caseload they are facing.”

Although the number of notices held steady between 2014 and 2015, there were 172 notices in 2016 according to a separate report by CFIUS.

REPRINTED WITH PERMISSION FROM THE SEPTEMBER 22, 2017 EDITION OF LAW360 © 2017 PORTFOLIO MEDIA INC. ALL RIGHTS RESERVED. FURTHER DUPLICATION WITHOUT PERMISSION IS PROHIBITED. WWW.LAW360.COM