On Sept. 19, 2017, the Committee on Foreign Investment in the United States released its unclassified annual report for the 2015 calendar year. CFIUS is an interagency committee authorized to review transactions that could result in the control of a U.S. business by a foreign person.

While dated, the information in the annual report is nevertheless useful: Among other things, the 2015 data clearly point to the CFIUS future we are now living through. We summarize below the seven main highlights and related key takeaways from the annual report.

1. Notices involving Chinese acquirers constituted the largest single category of all notices filed to CFIUS for the fourth year in a row.

In 2015, the top five countries of origin for acquirers were:

Takeaway: CFIUS continues to grapple with the challenges of Chinese investment in the U.S. Recent calls to reform and strengthen CFIUS have largely centered on CFIUS’ perceived inability to consistently manage the national security risks of Chinese investments in U.S. technology companies. Underscoring these concerns, Secretary of Defense James Mattis has referred to CFIUS as “outdated” and stated that the CFIUS process “needs to be updated to deal with today’s situation.”

The annual report included four new mitigation measures that had not previously been used to manage national security risks presented by a covered transaction:

1. Security protocols to ensure the integrity of goods or software sold to the U.S. government.

2. Notifications to customers regarding the change of ownership.

3. Assurances of continuity of supply for defined products, and notification and consultation prior to taking certain business decisions, with certain rights if the target company decided to exit a business line. This measure also included establishment of meetings to discuss business plans that might affect U.S. government supply or national security considerations.

4. Exclusion of sensitive assets from the transaction.

Takeaway: Parties to a transaction where mitigation may be imposed should carefully evaluate whether they would be willing to accept mitigation measures and bear any resulting commercial impacts, including increased administrative costs and potential loss of revenue, as conditions to CFIUS clearance.

By statute, all cases notified to CFIUS must undergo an initial 30-day review period. In certain cases (e.g., when the acquirer is foreign government-controlled), a subsequent “investigation” phase of 45 days is required, absent a waiver. 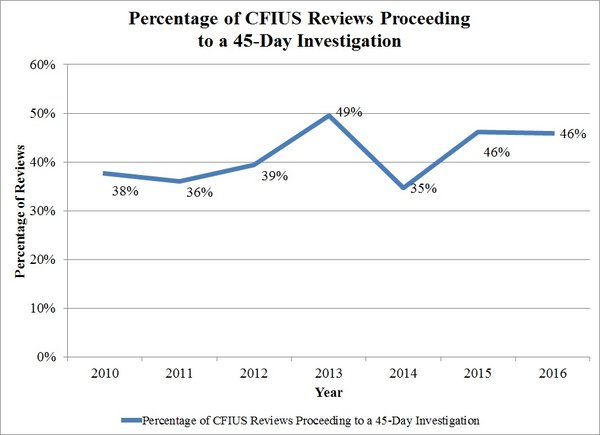 Takeaway: Parties to covered transactions should explicitly account for how a longer CFIUS review could affect, among other things:

4. The number of semiconductor transactions notified to CFIUS increased by 50 percent over the previous calendar year (2014).

Takeaway: Semiconductor transactions have become — and will likely remain — highly sensitive for CFIUS.

5. The scope of CFIUS’ understanding of “national security” is getting broader.

The annual report noted three perceived adverse effects on U.S. national security presented by transactions that CFIUS reviewed in 2015 which did not appear in the 2014 report. These involved foreign acquisitions of U.S. companies that:

2. Are in a field with significant national security implications in which there are few alternative suppliers or in which a loss to U.S. technological competitiveness would be detrimental to national security.

3. Have operations or facilities that are in proximity to military or other sensitive U.S. government facilities.

The first and second factors have not been previously included in a CFIUS annual report. CFIUS additionally noted that U.S. companies that hold potentially sensitive data could operate “in any number of sectors including, for example, the insurance sectors, health services, and technology services.”

While CFIUS’ review is holistic and considers all relevant factors about a covered transaction, parties considering whether to notify a transaction to CFIUS must now ensure that their assessments of national security sensitivity and deal risk explicitly account for these additional considerations.

CFIUS rejected one notice because CFIUS discovered public information that contradicted what the parties had included in their notice.

7. The U.S. Intelligence Community found that foreign governments are “extremely likely to use a range of collection methods to obtain critical U.S. technologies.”

Each annual report since 2009 has expressed the same conclusion.

Mario Mancuso is a partner in the Washington, D.C., office of Kirkland & Ellis LLP and leads the firm’s international trade and national security practice. He is a former U.S. undersecretary of commerce for industry and security and senior Defense Department official. During his time in government, he helped draft and implement regulations for the Foreign Investment and National Security Act of 2007 and reviewed hundreds of CFIUS transactions as a regulator.

Boyd Greene is a partner in the firm's Washington office.

Luci Hague is an associate in the firm's Washington office.

The opinions expressed are those of the author(s) and do not necessarily reflect the views of the firm, its clients, or Portfolio Media Inc., or any of its or their respective affiliates. This article is for general information purposes and is ??not intended to be and should not be taken as legal advice.

REPRINTED WITH PERMISSION FROM THE SEPTEMBER 25, 2017 EDITION OF LAW360 © 2017 PORTFOLIO MEDIA INC. ALL RIGHTS RESERVED. FURTHER DUPLICATION WITHOUT PERMISSION IS PROHIBITED. WWW.LAW360.COM