The recently released 2020 annual report from the Committee on Foreign Investment in the United States provides useful data for transaction planning purposes, particularly about the timing of CFIUS’ filing reviews and its processes for reaching out to parties in non-notified transactions, say Kirkland attorneys Mario Mancuso, Luci Hague and William Phalen in this article for Law360.

On July 26, the Committee on Foreign Investment in the United States released the unclassified version of its most recent annual report, covering calendar year 2020.[1]

While the annual report covers transactions that CFIUS evaluated prior to President Joe Biden taking office in January and thus does not reflect developments stemming from the new administration's national security policy priorities, the data in the annual report demonstrates CFIUS' continued relevance to cross-border transactions across diverse subsectors, including many that have not traditionally been considered sensitive — e.g., health and personal care stores.

Moreover, the annual report contains useful data for transaction planning purposes, including regarding the timing of CFIUS' reviews of filings and new data on CFIUS' processes for reaching out to parties on transactions for which no voluntary filing was made — so-called non-notified transactions.

We discuss below nine important highlights of the annual report and offer related takeaways.

1. Transaction parties appear to be increasingly choosing to make CFIUS filings on the basis of short-form declarations rather than traditional long-form joint voluntary notices.

Choosing to file on the basis of a declaration entails some risk to transaction parties, as CFIUS may respond to a declaration by requesting that the parties file a JVN — thus potentially pushing out closing timing by two to four months.

As a result, it is critical that transaction parties carefully assess whether a declaration is the proper vehicle for making a CFIUS filing based on, among other things, the buy-side's CFIUS history and risk profile, and the U.S. business's direct and indirect customer base — particularly with respect to provision of goods or services to U.S. government customers.

2. Amid the COVID-19 pandemic, CFIUS continued to process cases quickly and efficiently, clearing over 50% of JVNs filed in 2020 within the initial 45-day review period.

By statute, all cases notified to CFIUS on the basis of a JVN must undergo an initial 45-day review period. In certain cases — e.g., when the acquirer is foreign government-controlled — a subsequent investigation phase of 45 days is required, absent a waiver from the committee. 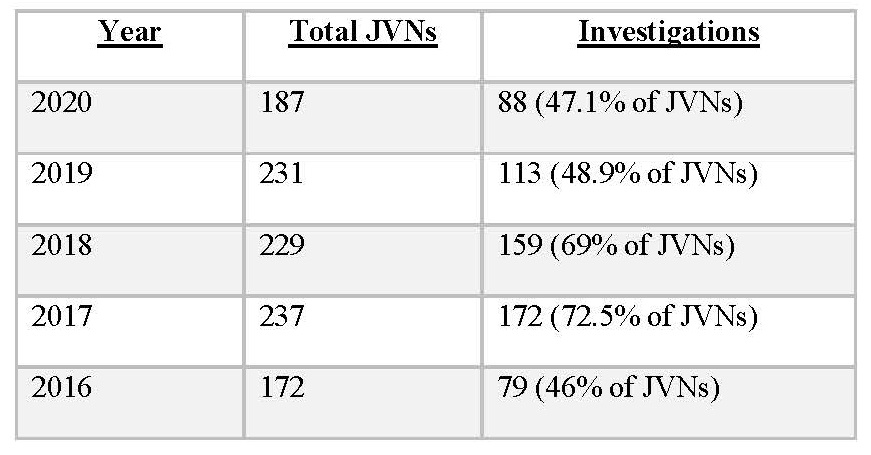 3. CFIUS continued to reach out to parties on non-notified transactions.

The annual report indicates that, in 2020, CFIUS staff identified 117 transactions through the non-notified process that were subsequently put forward to the committee for consideration. CFIUS subsequently requested a filing for 17 such transactions.

While the ratio of filings requested as compared to transactions put forward to the committee may appear low, the numbers do not capture deals identified in 2020 for which CFIUS requested a filing in 2021, or filings voluntarily made by parties after being contacted by CFIUS but before receiving a formal request to file.

In addition, the annual report notes that CFIUS received information on non-notified transactions from a variety of sources, including congressional outreach, media reports and tips from the public.

In 2020, the top five countries of origin for filers of JVNs were as follows: 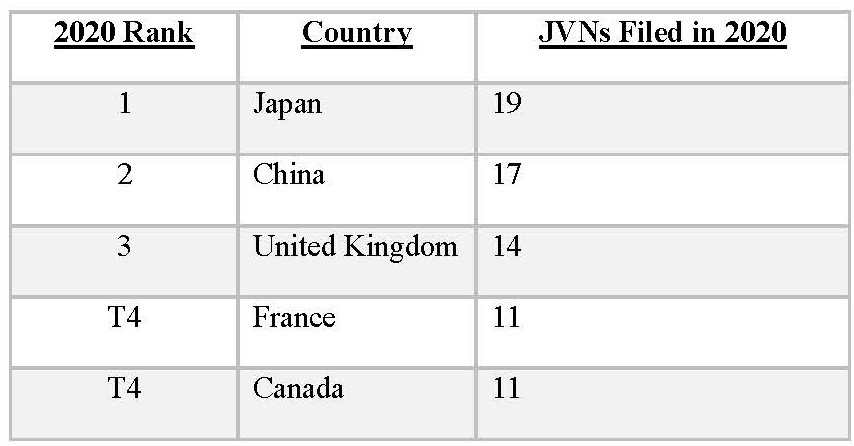 5. The annual report provides useful details about CFIUS' internal processes, including the timing of CFIUS' comments to JVNs and how long CFIUS takes to process declarations.

The declaration data indicate that transaction parties should not expect CFIUS to take action until the end of the 30-day assessment period. However, it also suggests the overall timeline from submission to conclusion should not take longer than 35-40 calendar days on average.

In 2020, the top five countries of origin for filers of declarations were as follows: 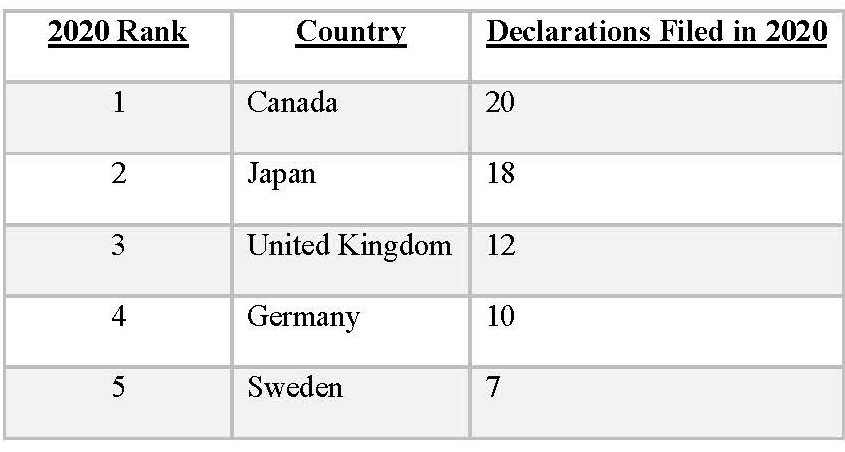 In 2020, transaction parties submitted only two declarations pursuant to the new real estate regulations at Title 31 of the Code of Federal Regulations, Part 802, which became effective in February 2020.

For transactions filed in 2020, CFIUS concluded action after adopting mitigation measures with respect to 16 JVNs — approximately 9% of 2020 JVNs. Five CFIUS agencies served as the U.S. Government signatories to these measures.

Finally, the annual report emphasizes that CFIUS will work to encourage a culture of compliance in connection with mitigation efforts.

CFIUS did not grant any waivers of a mandatory filing requirement to foreign entities in which a foreign government has a substantial interest.

Foreign government investors from so-call excepted foreign states — currently, Canada, the United Kingdom and Australia — are exempt from CFIUS' mandatory jurisdiction; however, the lack of waivers for entities in which other foreign government investors hold a substantial interest suggests that either such investors chose to file rather than seek an exemption or such exemptions were sought, but not granted.

CFIUS is becoming increasingly efficient. Since the final CFIUS regulations became effective, the committee has taken significant steps to reduce the average time from submission of a filing to approval.

With fewer JVNs entering the investigation phase and the successful implementation of the declaration process, transaction parties and their counsel are better able ensure that CFIUS is appropriately situated in the deal process and avoid having CFIUS become the long pole to closing a transaction.

CFIUS' outreach on non-notified transactions is here to stay. The annual report confirms that the CFIUS non-notifieds team is increasingly active, resourced and empowered, with many potential sources of information about transactions. Transaction parties must weigh the likelihood and potential outcomes of outreach from CFIUS in the interim period or post-closing against the perceived downsides of making a voluntary filing.

Moreover, transaction parties that are contacted by CFIUS' non-notified team must carefully manage engagement with CFIUS, as the outreach itself signals that CFIUS believes the transaction at issue may raise national security considerations. Making CFIUS filings on the basis of a declaration is often a good option for certain buyers, but the decision requires a careful assessment of how CFIUS may view a buyer's national security profile.

Filing a declaration instead of a JVN can have significant timing and cost advantages: Doing so permits parties to receive a faster decision from CFIUS and does not require the payment of a filing fee — which can be up to $300,000.

Moreover, the timing for the declaration assessment period — 30 calendar days — often aligns well with the timing for competition filings, including under the Hart-Scott-Rodino Act. In an auction process, making a CFIUS filing on the basis of a declaration in lieu of a JVN can make a non-U.S. investor's bid more competitive.

Buy-side self-due diligence is critical in order to assess the likely impacts of a CFIUS filing on deal timing, feasibility, certainty and cost. Prospective foreign acquirers should carefully evaluate how CFIUS may view, among other things, their independent value-chain exposure to countries and parties that CFIUS may consider risky, e.g., through joint ventures or other commercial relationships in China or Russia.

CFIUS annual reports provide important insights into the functioning of the CFIUS process, trends in foreign investment in the U.S. and key aspects of agency practice. This annual report in particular illustrates the increasing importance of CFIUS to cross-border mergers and acquisitions in 2020.

Indications from the first six months of the Biden administration suggest that the trends discussed above will continue in the near term. As a result, deal makers need to think proactively about how CFIUS could impact their past, current and future investments in order to mitigate the potential risks that the CFIUS process may pose to deal timing, certainty, feasibility and costs.


Mario Mancuso is a partner and leads the international trade and national security practice at Kirkland & Ellis LLP.

Lucille Hague is an associate at Kirkland & Ellis.

William G. Phalen is an associate at Kirkland & Ellis.

The opinions expressed are those of the author(s) and do not necessarily reflect the views of the firm, its clients or Portfolio Media Inc., or any of its or their respective affiliates. This article is for general information purposes and is not intended to be and should not be taken as legal advice.

REPRINTED WITH PERMISSION FROM THE AUGUST 4, 2021 EDITION OF LAW360 © 2021 PORTFOLIO MEDIA INC. ALL RIGHTS RESERVED. FURTHER DUPLICATION WITHOUT PERMISSION IS PROHIBITED. WWW.LAW360.COM